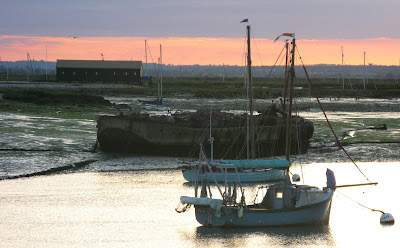 Gazing at the sunset this evening, as the children and I ate our picnic supper sitting on our upturned dinghy on the beach, reminded me that Mersea's famous Packing Shed  (on the left in the photo above) is currently celebrating the 20th anniversary of its restoration.

There will be a Packing Shed Open Day this coming Sunday, starting at 2pm, with motor launches leaving the hammerhead at regular intervals through the afternoon, to transport visitors to and from Packing Shed Island. Ferry tickets are £3 (adults), £1 (children), and the price includes a cream tea in the Shed, freedom to stroll around the island, with its abundant wildlife and lovely views of West Mersea, and the opportunity to learn a bit about the history of the Shed from members of the Packing Shed Trust.

At the end of the nineteenth century, Mersea's oyster industry was burgeoning. 'Mersea Natives' were transported by Thames sailing barge to Billingsgate Market in London and many thousands more were exported to the Continent. Cleaning and sorting oysters by size became an important part of the preparation process for export and sale. The first Packing Shed was built around 1890 by the Tollesbury and Mersea Native Oyster Fishing Company. Soon, more than 60 fishermen were working in and around the Shed, grading and packing their catch.

However, after a few years in operation, the original shed was completely destroyed in a storm. A replacement was built in 1897 and that Shed was used almost continuously until the late 1950s, when the industry collapsed as a result of the first post-war oyster disease. A second, smaller, shed was built in 1920 but that, too, was destroyed in gales and floods.  After the 1950s, the original Shed was used occasionally for the storage of fishing gear, but was eventually abandoned and left to rot.

After the ravages of the great storm of 1987, all that remained was a bare skeleton - picturesque and beloved of artists, but liable to total collapse at any moment. It was at this point that a group of volunteers decided that the building had to be restored, once and for all, or it would disappear into the sea and be lost forever.  Today, thanks to the dedication of the current Trust and other volunteers, and funded entirely by public donations, the Shed is not only an important historical landmark, but is also available for hire as a venue for parties, dinners, and even wedding receptions for the more adventurous bride and groom.

You can read all about the restoration - and lots more besides - on the Packing Shed website . 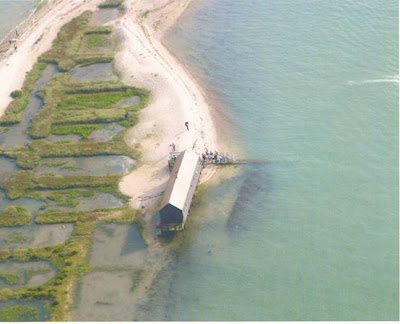 Unfortunately, the Shed now faces another threat - erosion. The island on which it sits is being gradually eaten away by the sea, so a huge amount of money has been raised to replace the original shells and sand with granite ballast. The first wave of reinforcement has proved successful but the process is going to have to be continuous if the Shed is to survive, so fund-raising remains a priority.

The Packing Shed is featured in the 'save our seaside' pages of this month's Coast magazine. 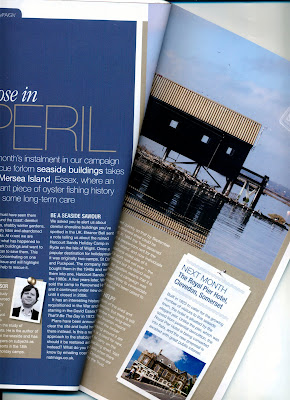 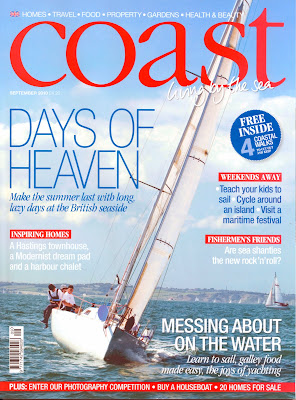 I noticed your "current reading" list -- I'm just starting Siri Hustvedt's "What I Loved" after having read two of her other novels, "The Blindfold" and "The Sorrows of an American." The latter is riveting but disquieting; the former is riveting but unnerving. Both typical of this uniquely talented author.

I can recommend "The Time Traveler's Wife," by Audrey Niffenegger -- If you haven't already read it. Amazing writing. Gripping love story.

Lovely to see you back. The aerial picture is petrifying.