Bereavement in the Blogosphere 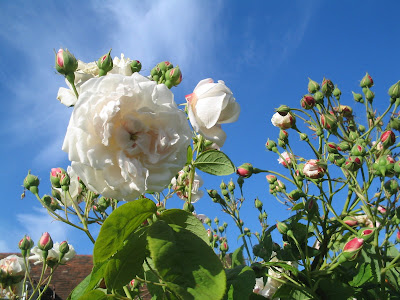 Perhaps the most amazing thing about blogs is that, no sooner does one start blogging than one instantly becomes a member of that global club, The Blogosphere, whether one had intended to join a 'community' or not. I had no inkling of this when I took my first tentative steps in public musing. But within weeks I felt amongst friends (a few enemies, too, during a spate of harassment from some American readers with views diametrically opposed, politically, to my own, but that fizzled out after a while).

It now feels so natural to correspond almost daily with my dearest blog-friends that I forget what a strange and relatively new phenomenon it all is. So strange, indeed, that many bloggers are moved to stop, take stock, and muse about it every once in a while. And here is my three ha'pence-worth.

Though some might post the occasional photo of themselves, mostly these are people we know only through the written word. But how quickly and vividly individual characters and personalities emerge through their words. When, that is, those words are written, not for effect, but as a straightforward means of communication from one heart and mind to others. And the effect on their reader's hearts and minds, especially when such words are written with natural, unselfconscious style and grace and wit, can be considerable and deeply affecting.

I have been lucky enough to meet in Real Life several people whom I first encountered online and subsequently corresponded with at length by email, and what has been most surprising about those meetings is just how unsurprising they turned out to be. Delightful, yes, but not surprising. Because the outer person had been so well represented by the inner writer that the existing friendships were entirely real; meeting merely added a new dimension to something that was quite solid already.

And I have a 'little list' of fellow bloggers whom I am DEFINITELY GOING TO MEET IN 2009. (I'm hoping that the list is mutually compatible or there might indeed be a nasty surprise for one or two people when I turn up on their doorstep!) My confident belief is that, when we do meet, there will simply be a continuation and perhaps deepening of our online friendships, rather than a radical overturning of our views and expectations.

But there is a more melancholy aspect to establishing these disembodied friendships, and it is this: how do we properly grieve for those we feel we know (do indeed know) so well, but have never met or even perhaps communicated with in any way?

This was eloquently and movingly considered at Random Distractions and Think of England following the recent death of Robert Duquette of The Daily Duck . Not a blog I read myself, but for those who grew to know him through his words, via his blog, his comments and their private correspondence, Robert's loss is keenly felt. As Brit says:

'There is no prescribed protocol for such situations in this strange world of pseudonyms and comment threads. But I knew Robert through blog posts, so I will remember him in a blog post . . . In the end I never met Robert in the flesh, and now I never will.'

My first experience of this was last summer, on the sudden death of Steve, aka The Doggerlist , whose fantastically clever and witty poetry blog I had discovered in its earliest days, and I was honoured that he was, in turn, a regular reader and commenter on Musings. It brought me up sharp to be reminded last week that he had left a comment on last year's self-indulgent 'birthday post', which in retrospect was painfully poignant: 'Happy Birthday Juliet, you're exactly six months (to the day) behind me in life's muddy steeplechase....'

And today - and this is ultimately the reason for this rambling post - I was deeply saddened to read, in a final post on her blog, by her husband, of the death from cancer last Friday of Lisa Ratcliffe, The Hesitant Scribe. She was 39.

Like pretty much every blog I've ever landed on, I arrived at Lisa's by pure chance. It was just over a year ago: she was feeling ill, but the cancer had not yet been diagnosed. A few days later the biopsy came back and her long and often traumatic treatment began almost immediately.

Lisa documented what turned out to be the final year of her life with incredible courage, humour and panache. Reading her blog was often painful but also a joy, because she wrote so well and with such searing honesty. Her spirit shone through like big shafts of sunlight. I was one of her 'silent readers' and she was unaware of my existence. So she wasn't even a 'blog-friend', but she felt like one, and I mourn her passing. And marvel, once again, at the power of the blogosphere as a place where small snippets (or even huge swathes) of the lives - and deaths - of others touch our own. It is a humbling and enriching experience.
Posted by Juliet at 15:51

A very thought provoking post, Juliet. How much I agree with your final two sentences in particular.

J, I am sorry for the sadness that touches you through the loss of these on-line friends. I know how real that loss is, even when you haven't actually met the people concerned. The grief may be different but just as real as when one loses a close friend.

Lisa was my colleague and, I'd like to think, my friend. Her funeral was today, and many of her colleagues were present: not me, unfortunately. She had a good send off. Prof Robert Sheppard, avant-garde poet and one of her PhD supervisors, gave a eulogy, and her daughters and husband read poems they had written about her.
The end for Lisa was swift and cruel. In those last weeks, she frequently returned to the theme of the urgent need to get things done- carpe diem, in essence. Wise words.

How wonderfully written, Juliet. I think you have expressed this 'situation,' for lack of a better word, very well. I didn't read any of the blogs you mentioned, but there is a blogger in Canada who spent a year studying in England, came home, and is now very, very ill, whose blog I've been reading a while now.