Today's Friday Interviewee is Craig Conley, whose Magic Words: A Dictionary is published in paperback this week. 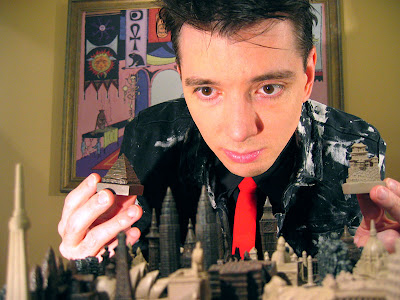 I first encountered Craig earlier this year, through this guest post on the inspirational ColourLovers blog. I mentioned on Musings at the time how delighted I was to land on Craig's own site and discover, for example, his book of annotated ellipses (which you can read online) and his 'unconventional' guide to the mysteries of Portmeirion.

Described by Encarta as 'America’s most creative and diligent scholar of letters, words and punctuation', Craig has also been called a 'cult hero' by Publisher’s Weekly. A former college teacher of writing and literature, he left academia to pursue his research into one-letter words, magic words and ancient Zen versions of Rock-Paper-Scissors. In addition to Magic Words: A Dictionary and One-Letter Words: A Dictionary, he has written a field guide to identifying unicorns by sound, a coloring book that requires no crayons, an atlas of blank maps, and four editions of the textbook Human Diversity: A Guide for Understanding. Craig is also a regular contributor to Pentacle Magazine.

Craig, your dictionary of one-letter words is a revelation. How did it all start?

Who knows why, but I have an eye for anomalies in text. A solitary letter of the alphabet in the middle of a sentence is like a blip on the radar of my vision. I can't help but focus my attention on such anomalies and wonder 'what's their story?' Over the course of several years and through the use of profuse bookmarks and scribbled notes, I found myself with enough one-letter words for an entire dictionary.

My eye for textual aberrations also led to my compilations of all-consonant and all-vowel words, as well as magic words.

One of my favorite one-letter words has to be X, which boasts nearly 60 definitions of its own. X marks the spot on a pirate’s map where treasure is buried. It’s a hobo symbol meaning handouts are available. X tells you where to sign your name on a contract, and it’s also an illiterate person’s signature. X indicates a choice on a voting ballot, and a cross stitch of thread. Mysterious people may be named Madame X, and the archetype of a mad scientist is Dr. X. X is an incorrect answer on a test, and it’s a rating for an adult movie. X is a power of magnification, an axis on a graph, and a female chromosome. It is a multiplication operator, a letter of the alphabet, and an arbitrary point in time. X is a kiss at the end of a love letter.

Another favorite letter is O, which Shakespeare used to describe stars ('All yon fiery Oes' in A Midsummer Night's Dream), the earth ('The little O, the earth' in Antony and Cleopatra), and an affliction ('Why should you call into so deep an O?' in Romeo and Juliet). All those X's and O's led me to wonder whether every game of Tic Tac Toe told a story! I even worked up a 'Tic Tac Toe Story Generator' so that players can share their tales. 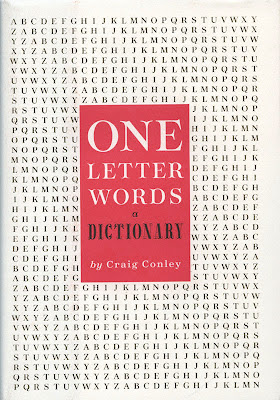 In retrospect, it was actually a natural progression. The letters of the alphabet are like the building blocks of language, and magic words are like the blueprints or ‘mission statements’ for constructing reality. In the course of gathering together one thousand different meanings for the letters of the alphabet, I saw over and over again how letters are inseparable from mysticism in cultures all around the world. Mythologies tell of the alphabet's divine origin and how deities used language to speak the world into existence. So my dictionary of one-letter words would actually qualify as a collection of magic words (albeit very small ones!). As an amateur magician and scholar of magic, I've come across thousands of references to magic words over the years, and that no doubt sparked the idea to celebrate and codify the lexicon. But my main inspiration is literature itself - the power of carefully chosen words and carefully constructed sentences to transport a reader into other worlds, other times, even other lives. 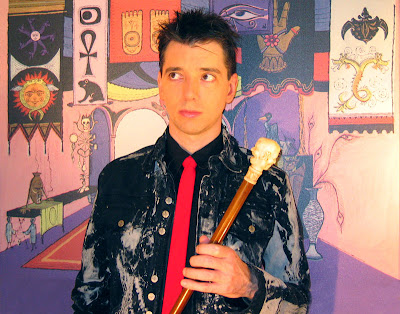 What exactly qualifies a word as ‘magic’?

‘Magic’ refers to a state of consciousness - an awareness of mysterious possibilities in humanity and the universe at large. I once had a friend who said he believed only what he could see and touch, and I was dumbfounded! What a tiny reality he created for himself! Ironically, my friend was a meteorologist, and one would think that of all professions, meteorology would foster an appreciation for the unpredictable! The problem, of course, is that magic is commonly associated with superstition. But as the physicist B K Ridley eloquently explains:

‘what is not scientific is not necessarily superstition. Forces that move people exist which lie outside the scientific domain by their very nature — everyday forces, neither supernatural nor occult, plain to everybody, part of the human experience. Even our everyday language employs the image of the mechanical effect of a force when we speak of being moved by a certain purely mental experience. Who does not respond to the power of form, of colour, of symbols, and is this not what used to be called talismanic magic? Who is not delighted and moved by the artful use of words, incantations, names as essences, oratory, poetry, and is this not word magic? Is not the effect of harmony and melody magic? And is there not an elemental magic in the intuition of the craftsman, even in the 'feel' of the technician for his machine, though it be a product of the highest technology? To say nothing of common sense? Surely the answer to all these questions is yes. Then these are nothing but the well-known elements of natural magic stripped of their superstitious and supernatural patina. Magic, thus defined, is the complement of science. It acts, not on material objects, but on human sensibility. At its highest intellectual development, reached in the seventeenth century just when science was beginning, magical theory could describe a cosmos full of meaning to the human spirit, a latter day Theory of Everything.’ (On Science, 2001).

Our most potent magic words are microcosms that reverberate with echoes of the campfire storyteller's mythology. Magic words have been called fugitives from dreams and fairy tales. They are mysterious, shadowy, and perhaps indecipherable, yet their cadence possesses an unmistakable profundity. We know the phenomenon in great poetry, where we might be deeply struck by language we don't fully comprehend. With magic words, we define a sacred arena where miracles can come into play. There are profound truths in that old cliché of a magician pulling a rabbit out of an empty hat with the magic word ‘abracadabra’. Almost everyone recognizes the image. But what relatively few people know is that our stereotypical magician is speaking an ancient Hebrew phrase that means ‘I will create with words’. He is making something out of nothing, echoing that famous line from Genesis: ‘Let there be light, and there was light.’ 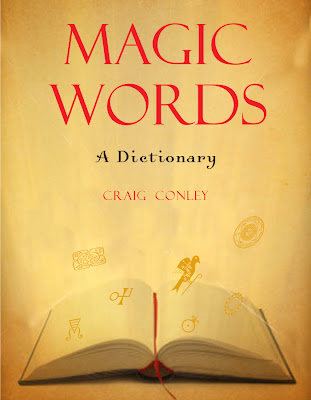 Can any word be a magic word?

Yes. Here's why: Language has the power to reawaken vestiges of humankind’s earliest communication — our ancient ancestors’ savage cries of anger or love. All such cries were commands; to the primitive mind the command was inseparable from the act, much in the way that a small child learns to conjure up a parent from the unseen void of an adjoining room, simply by employing a magic word like ‘Mama’.

A great many ‘commonplace’ words come standard with a special spark of their own. Literature, folklore, and even advertising are replete with examples of commonplace words that are rich with magical connotations. ‘Paris’ conjures romance. The old name for China, ‘Cathay’, recalls an exotic, faraway land of spices and silks. ‘Riviera’ bespeaks elegance and excitement. The word ‘holiday’ whisks us away to a private paradise. The word ‘now’, spoken with a commanding voice, awakens one's inner six-year-old child who instinctively obeys a parental command.

If intoned in the proper spirit, any word can be a magic word. However, the most powerful magic words are ancient-sounding. They project an aura of tradition, of ‘old wisdom’ handed down through the generations. Their mysteriousness addresses our instinctive understanding that words are powerful, creative forces. 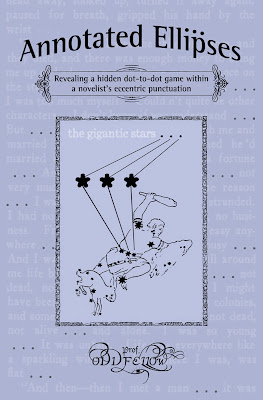 How can one find one's own magic words?

It all depends on what kind of magician one is. We're all magicians, for the magician archetype is a primal aspect of the human psyche. In my dictionary I explain how there are four basic types of magicians:

Trickster, Sorcerer, Oracle, and Sage. One good way to determine your type is to think about how you'd organize a friend's birthday party.

A trickster type is mischievous and would be inclined to throw a surprise party or a hire a novelty singing telegram. ‘I can't believe you did this’ would be a typical reaction. The trickster's magic words are likely to be funny-sounding tongue-twisters or irreverent wordplays.

A sorcerer type likes to make huge impressions with grand gestures, such as arranging a lavish, elegant dinner party. ‘I'm speechless’ would be a typical reaction. The sorcerer's magic words are likely to be weighty and mysterious syllables from Egyptian and European wizards of old.

An oracle type would take a psychological approach and snoop out the ultimate gift as if through mind-reading. ‘How on earth did you know I wanted this?’ would be a typical reaction. An oracle's magic words would be friendly, familiar words like ‘vacation’ that cause us to spirit off to a fantasy world.

A sage type would take a philosophical approach and act as a wise one or guide to give a friend symbolic wings; the birthday would be an ordinary day made extraordinary by awakening the inner child to see with eyes of wonder. ‘Only you could have made today so special’ would be a typical reaction. The sage's magic words are likely to be mystic chants of Judaism's Kabbalists, Islam's Sufis, Christianity's Gnostics, Buddhism's Lamas, and Hinduism's Gurus. 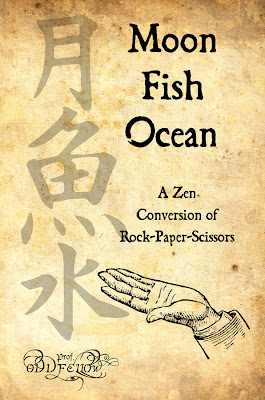 What is the most unusual magic word you found?

There are so many unusual ones! One favorite is a summoning spell from ancient Egypt. ‘Abba Abba Abba Ablanatha Nafla Akrama Chamari Ely Temach Achoocha’. The Aramaic word ‘Abba’ beseeches a primordial father figure. ‘Ablanathanalba’ refers to a griffin (eagle's head, lion's body) who protects a sacred shrine. ‘Akrammachamari’ is a word found on Egyptian amulets to ward off evil. The spell conjures the divine power of God's tattoos. On the original Coptic manuscript is a rather exotic image showing the seven holy vowels of the Greek alphabet tattooed across the divine's chest! 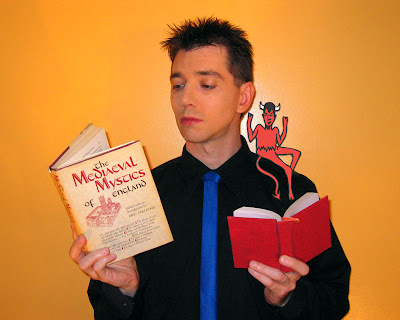 Again, there are so many! One favorite comes from one of the Oz books by L. Frank Baum, entitled The Magic of Oz, written in 1919. It's a word discovered by a munchkin that can transform anything into anything else - if you pronounce it correctly. It's a wild word, full of unlikely letters like x, q, z, y, g. I'm disinclined to talk about it, lest I unleash the mischief that the munchkin warns against! But for those curious, it's the final entry in the P section of my dictionary.

You can read more of Craig's magical investigations on his Magic Words blog and Magician's Hidden Library site.

And for a joyful daily dose of word-related wisdom, wit and whimsy, do visit his excellent Abecedarian blog.