Having posted a clip from The Clangers on my late-night musings about soup (and Soupdragons) yesterday, I was especially saddened this morning to hear the announcement of the death of Oliver Postgate, co-creator - with Peter Firmin - of that wonderful programme. Postgate's deliciously comforting voice is embedded deep in the soundtrack of my childhood.

The blogosphere is already, unsurprisingly, awash with appreciations of Oliver Postgate and his work: where would we be today without Noggin the Nog , Ivor the Engine or The Pogles?

I was too old to appreciate his most popular series - Bagpuss - when it first hit the screen, but my children have certainly made up for that in subsequent years: the 'Complete Bagpuss' DVD still makes an appearance occasionally, and not just at the behest of the 7-year-old! 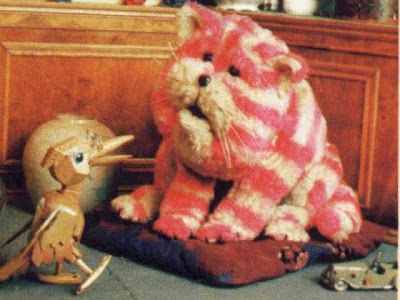 I'd like to remember Oliver Postgate today with something less familiar, indeed the one Postgate-Firmin creation which no-one else I've ever met seems to remember - The Pingwings.
These delightful little characters were knitted by Peter's sister Gloria, and their adventures were aired (in black and white) between 1963 and 1967, but never subsequently repeated. My parents didn't even possess a television in 1963, so I imagine that much of my vivid recollection of the Pingwings is owing to the novelty of watching it while staying with my maternal grandparents.
Here's the only Pingwings clip on YouTube. Until today, I didn't think I'd ever see them again, so I'm wallowing in misty-eyed nostalgia:
Posted by Juliet at 11:04

J: you absolutely must visit this lovely website:
http://www.dragons-friendly-society.co.uk/ which
"exclusively publishes books and videos of the children's television programmes made by Smallfilms". It has some wonderful rmemories of Oliver P and you can buy DVDs of Pogles Wood, Noggin the Nog - and Pingwings!

D - oooh, thank you! Pingwings DVD now on Christmas list (ie for me to buy for myself for Christmas!)

Juliet, you may (or maybe not!) interested to know that Oliver's father Raymond wrote a quite brilliant crime novel nearly 70 years ago. It was called Verdict of Twelve and it has some unique features. Raymond only wrote two other crime novels, but he did set up The Good Food Guide. Quite a family.

Martin - gosh, I wasn't aware of that and it is VERY interesting to know! So thanks for mentioning it. I want to get my hands on a copy of Oliver Postgate's memoir but it seems difficult to find and of course there will be a huge rush for available copies now.

Hey, I'm still waiting to hear from anyone who remembers the Pingwings!!!

I hadn't heard of the Pingwings but your clip makes me think I would have loved them.

"You must come! Mama has laid an egg!" Juliet, now I want to make a Pingwing. No, I don't remember them, but I'll ask the DH tonight when he rings from Noggin land.

PS. Thanks to Martin for the book recommendation.

Ah! Now I know what Bagpuss is! Growing up in Australia, it was never shown here, but I've seen it referred to a LOT in British stuff, and now I have my explanation!