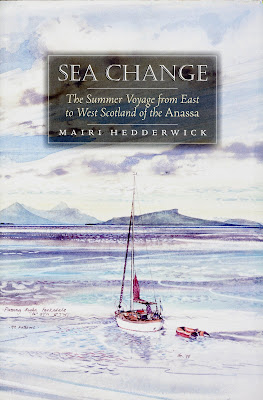 Occasionally one plucks a book from the TBR mountain, seemingly at random, which turns out to be Just Exactly Right.
For me, Sea Change: The Summer Voyage from East to West Scotland of the "Anassa", by Mairi Hedderwick - which has been sitting on the TBR pile for literally years, since I acquired it when last in the Hebrides - proved, last week, Precisely Perfect in Every Way.

Regular readers may in fact remember that I was resolved to make a start on it way back in May, when I mused about my family's love of the author's delightful Katie Morag stories . But I was sidetracked by other books and it became submerged. My 'summer reading' has ranged from sporadic to non-existent - just too much else going on. But I suddenly remembered it and it seemed like a good choice of beach reading in Mersea Week, when boats are - even more than usual - the island's defining theme.

Sea Change opens with a couple of quotes, the second of which is from Better Small Boat Sailing by John Fisher (1955): 'Two kinds of women take to boats - those who like it and those who fear to be left behind.'

Born in Gourock, Mairi Hedderwick took a job, at the age of 17, as a mother's help on the Island of Coll in the Hebrides and there began a life-long love affair with islands and small communities bounded by sea. After attending the Edinburgh College of Art, Mairi married and had two children. In 1962 she decided to opt out of the rat race, and the family moved to Coll where they lived in a house three miles from the nearest neighbour with no road or electricity, with the only water available from a well. The Isle of Struay, setting for the Katie Morag stories, is loosely based on Coll. Though some of her grandchildren live there still, on turning 60, Mairi decided it was time to stop being 'Grannie Island' and to move on to becoming 'Granma Mainland'. Sea Change is the story of the journey she decided to undertake to mark this great turning point in her life:

'I had decided to leave the island, and live on the mainland. But before the transition, I had also decided, the water in between would have to be propitiated - slowly, lingeringly, and bravely. It would be a fitting farewell to the seascape I have loved and known so well for so long - but always with my feet firmly planted on the rock and sand of the island.

I am in awe of the sea; I am also frightened by it. "But you lived on an island!" Ah, but that is the excitement of it! To be surrounded by such an element makes for a feeling of security - in storm or calm. To look out of a salt-encrusted window at a Force 10 in the bay, kettle bouncing and blistering on the hotplate, is quite the most secure of feelings. Equally, to hear the scritch-scratching of lazy sun-soaked wavelets on the shore, through wide-open windows in the long, light nights of June, that also confirms safe encirclement.'

'Safe encirclement' - the true words of a landlubbing islander - just like me! 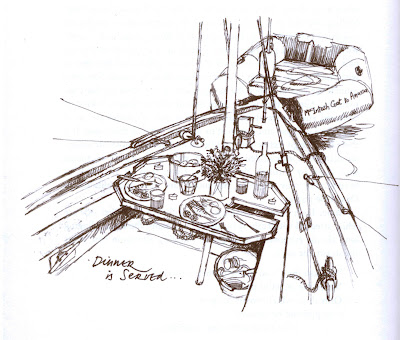 Hedderwick and her unnamed 'Captain', an old family friend, purchase a rare classic cruiser, Anassa, built in Rangoon in 1954, and embark on a six-week voyage from Lossiemouth on the east coast of Scotland, down the Caledonian Canal and out to sea, through the Sound of Mull and northwards around the western coast as far as Loch Nevis.

'What better way to say farewell to my island home than sail the waters between island and mainland and explore the fingers of fjords that indent the west coast of Scotland? Be an adventurer in the last true wilderness with only the silver-pathed reflection of the moon and the stars to guide the way.'

The pair's roles are clearly defined. The (very experienced) Captain is firmly in charge of navigation and sailing, while Hedderwick is cook, bottlewasher, mistress of home comforts aboard their cramped temporary home and slightly reluctant and nervous 'crew'. And, of course, records the whole journey in ink and watercolour, as well as words. And what words! She writes so directly, so honestly and so darned well. We are party to her deepest lifelong fears of the sea, of seaweed, and of hideous, nameless sea-monsters; her persistent seasickness; her sense, always, that she is out of her element on a boat and that everything that goes wrong is entirely her fault. But her dogged persistence and determination that she will do this are hugely endearing and we will her to overcome her demons and succeed. 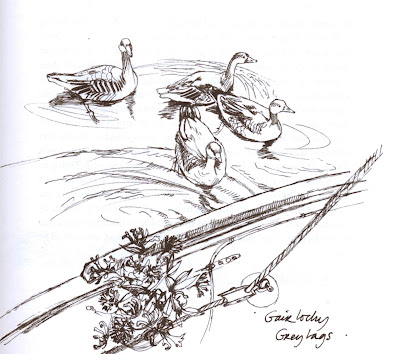 There are setbacks right from the start. They run aground in the Moray Firth, caught on an uncharted shingle bar at the mouth of the River Ness, brought down by storm floods:

'There is another split second of disorientation, followed by total incomprehension and panic. I scramble up the slope of the deck to the port gunwale, as evil swirling river water rushes over the starboard gunwale. Immediately the Captain is getting me into my survival suit and lifejacket. I'm incapable of any action save clinging to the rail and looking skywards. The inflatable dinghy takes for ever to unrope from the deck. The Captain's foot inflates it a crazy speed, at a crazy angle. I am waiting for Anassa to crack asunder or keel right over. Can I swim for the far shore, where people are already stopping their cars and staring? I will not swim over the yellow fingers of seaweed that dervish-dance along the submerged port side. How far will I have to jump to avoid them . . .?

As the seconds of panic ease into minutes of possibly reassuring stability, only because I move not a muscle and shallow breath, the Captain assesses our situation. "We'll just have to wait for the tide to come back in and lift her off. No problem. Just patience." . . . He is laughing. Would you believe it? As I relax my grip on the stays . . . my knees trembling with loosening tension, I know it has all been my fault. Guilt floods in with the enervation. What damage has been done to Anassa's keel and hull? My fault, my fault . . . I was at the helm . . . Day one of the Voyage and I am quite ready to pack it all in.'

There are many other moments of adversity - some nautical, some practical, some concerning tensions in the relationship between the frequently tetchy Captain and his often frightened and frustrated crewmember. Yet somehow, despite it all, they find a shared humour and slog on, according to their original plans as far as possible. 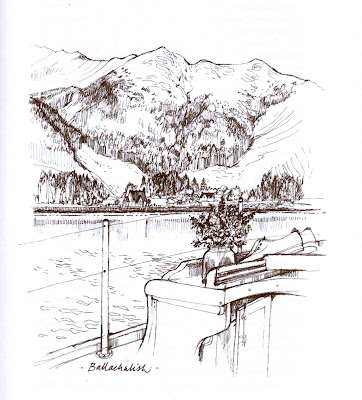 The author's acute ear and eye for character, so evident in the Katie Morag stories, make for some delicious, spot-on, descriptions of people and boats encountered en route. And her response to the eternally magnificent West Highland scenery is unfailingly fresh, never descending into guidebook cliche, for which one can only give her extra, grateful, points.

This is a spiritual journey and a personal challenge greater than it might, at first, appear. Yet despite the deeply serious, life-changing intent and effect of the voyage, Hedderwick is adorably self-effacing throughout. Just when we think she's really getting to grips with life afloat, she'll make some desperate, yearning reference to bubble baths or luxury loos. And near the end of the return trip, having triumphantly achieved her 'foody' objective of eating only freshly gathered sustenance (no tins or packets on board - lots of fresh-caught mackerel) for six weeks, she is suddenly overcome by a dispiriting suspicion that the Captain is in fact a secret Pot Noodle eater.

Set in some of the British coastline dearest to my own heart, and written in the slightly bewildered voice of the non-boaty person rather belatedly afloat, Sea Change spoke very directly to me and I found it sheer unputdownable delight from start to finish.

Fold-out reproductions of Hedderwick's lovely watercolour seascapes, and dozens of line sketches of life on board Anassa make the book visually interesting, too, but in my view the words alone amply convey the essential truths and beauties of the author's remarkable Sea Change.
Posted by Juliet at 12:03

I've spent all my adult life by the sea but remained a landlubber. I love that image of 'safe encirclement' and greatly admire people who dare to break out of it. My greatest adventure when I reached 60 was to set out into the blogosphere, where I've met some wonderful people but without leaving my desk. I'd love to have a real adventure like Mairi Hedderwick - does anyone else need a cook, bottlewasher and mistress of home comforts?