. . . but have been barricaded in for the weekend with a huge manuscript to edit and everything else has gone on hold. Dispatched rest of family to the other end of the island for the duration, where they have been enjoying cycling, barbecues and generally getting rather dirty and smelly. Two of them are back now and the other two are somewhere north of Cambridge (I think), photographing a gig.
The weather has been changeable, to say the least. Just after lunch it was so hot and sunny that I decamped to the garden to work outside for a while. I stepped indoors to put the kettle on, weighting down 200 pages with my mobile phone, and returned 30 seconds later to discover 200 individual pages gusting around the lawn in a strong breeze which had whipped up from absolutely nowhere. Luckily, the pages were numbered. And luckily, I found them all!
So in I came again, and when next I lifted my head and put the kettle on, this is what I saw: 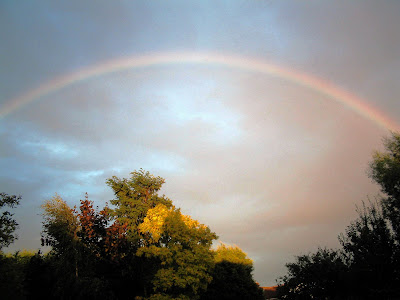 Which prompted a quick run down to the beach for some fresh air and the day's only exercise (apart from switching on the kettle). There was the most spectacular sunset, but I didn't think to grab the camera before I skipped out of the door.
Am hoping to achieve some semblance of blogging normality during the week, but right now must get back to my pile of paper and trusty red pen.
Posted by Juliet at 21:25

Relieved to know you are still here! Please keep on showing those lovely skies even if you don't have time to write.

Don't envy you the red pen or that (scattered) manuscript, J. But then I have to remind myself that I also have work to do, as well as blogging and taking photos, which both satisfy the creative urge but do not pay the bills . . . (if only).

Saw that rainbow too it cheered me up at the time having just had surgery on my leg :-( and it has cheered me up again seeing it again, especially as I have sneaked out to the computer when I'm not supposed too! Thanks Juliet.

Teresa - poor you! I didn't realise you'd been in hospital. I've just been admiring all your holiday pics. It's ages since I was in Milan. Hope you can at least keep on knitting while you recover, and hope you're feeling better again soon.

glad you got all the manuscript pages back! Mine sometimes end up with paw prints and I have to resort to a pencil eraser to hide the evidence that a cat was sat on the pile!