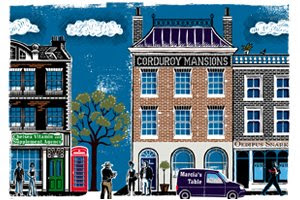 I confess that the Daily Telegraph is not a publication which often crosses the threshold of Musings Towers, but it is eagerly being granted electronic ingress for the foreseeable, owing to the daily publication online of the latest serialised novel by Alexander McCall Smith. Replacing the temporarily suspended Scotland Street series, Corduroy Mansions will appear every week day for 20 weeks, starting today. It is also available as a podcast, read by Andrew Sachs.
Corduroy Mansions is an unassuming large house in London's Pimlico, inhabited by an assortment of characters and one dog, writes Alexander McCall Smith. The date of the building is indeterminate, but there are Arts and Craft features that point to the very late nineteenth century. It is believed to have been built as an asylum, or possibly a school, or a mansion block. In fact, nothing is known about the building's history, although it does feature in a guide to the architecture of Pimlico. It is described there as "a building of no interest whatsoever". The nickname Corduroy Mansions was given in jest by a fashionable person, and stuck.
To read online or by email and to download the podcasts, simply subscribe here.
Posted by Juliet at 10:25

Thanks for writing about this new series, Juliet. I liked the Scotland Street stories and Corduroy Mansions is promising so far. I've opted for the podcasts. But, boy, are the "chapters" short! Cheers, Cathy