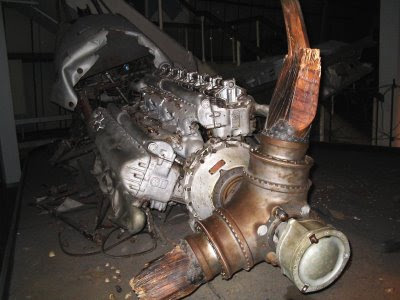 Long-time droppers-in to Musings may remember how moving I found the remains of this Hurricaine on a visit to the RAF Museum, Hendon earlier this year.

It was the plane in which, on 31 August 1940, Pilot Officer Gerard Maffett took off from Martlesham Heath, Suffolk as part of a formation sent against raiding German planes. The Squadron claimed several Messerschmitts but lost two Hurricanes, of which this was one. Pilot Office Maffett was killed when his parachute failed to open in time as he bailed out at low altitude. The remains of his plane lay where it fell at Walton-on-the-Naze.

Well this morning I received a comment on that post from Andy, who lives in Berkshire, where Pilot Officer Maffett was finally buried. This is what Andy said:

'Gerrard Maffett is buried in Bray Cemetery near his home town of Maidenhead. I walk past it with my dog, and the kids when they can be bothered, most days. He was just 22 years old when he was killed. His mother, who lived to be 100, and who's ashes rest next to him, lost 2 sons in that war. A story repeated how many times ? This grave, along with so many others, is looked after by volunteers and is kept beautifully. I think it is important that the sacrifices that were made over and over again should be remembered now and in the future. As a " local " you might enjoy " One Hurricane One Raid " by Geoff Rayner which tells the story of the pilot and his aircraft. There are lots of places and even names you might know. I also hugely enjoyed " First Light " by Geoffrey Wellum, The authors account of flying through the Battle of Britain aged 18 ! No wonder his squadron called him " Boy" '

Thank you so much Andy. Bray is not far from where my parents live. Next time I'm there, I shall make a point of visiting the grave of a young man who flew to his death in the skies I can see from my window.
Posted by Juliet at 12:56

So sad and touching. It gives me shivers.

Imagine living that long after the tragic death of your 22 year old son - who died defending her and all of us. Very moving. Teresa

Very nice to see this small item on Gerard Maffett. I currently look after his grave, and was able to give it a complete renovation before the 68th anniversary of his death on August 31st 1940. Just one small correction. Gerard was 24yrs of age on his death.Refering to an earlier comment, it is true that his mother lived to be 100.Her other pilot son, killed in 1942, has no known grave, and is commorated on the Runnymede war memorial.