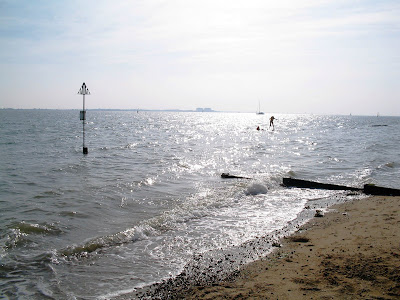 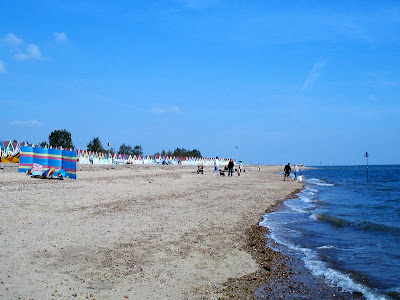 What an extraordinary weekend it's been - as though two whole days had slipped through August's net and landed in late September by mistake.

The beach this afternoon was crowded with swimmers and sunbathers, kite-fliers and windsurfers. Beach huts - completely deserted only a couple of weeks ago - were thrown open. Windbreaks were staked out and towels laid on the sand. And the silver sea teemed with yachts.

Despite feeling rather under the weather, I decided to take the dog out after lunch and ended up strolling in the sunshine for a couple of hours. The evident delight of everyone around was quite infectious and uplifting. And oh, how I envied those afloat on such a beautiful afternoon.
So I was somewhat taken aback to pick up my first conker of the year on the way home - a timely reminder that autumn is, in fact, upon us after all. I found it beneath a tree I now rather dread passing, on account of this bizarre encounter almost a year ago.
SD#3 has decided that she's not going to be a rugby player after all; she's gong to concentrate exclusively on dancing. So Sunday mornings are my own again - hooray! At least, they're mine and hers together, and I can see that we're going to be getting through a lot of Famous Five books and making plenty of cakes and scones (baking being her other passion at the moment) over the current season. Of course, we'll go along to support SD#2 on home match days, and remind ourselves of the delights of chips and Guinness and bacon butties in the clubhouse, but it will be an occasional treat, rather than a weekly ordeal.

Am still using the not very reliable borrowed camera. Received a quote last week from the repair shop for fixing the new one I accidentally ruined, and the cost of replacing the sand-jammed parts is prohibitive - more than half the purchase price! An expensive consequence of a friendly chat (just as the destruction of my previous mobile phone was an expensive consequence of an impulse supermarket purchase). But, hey ho, c'est ma vie. The sometimes unwelcome consequences of spontaneity. 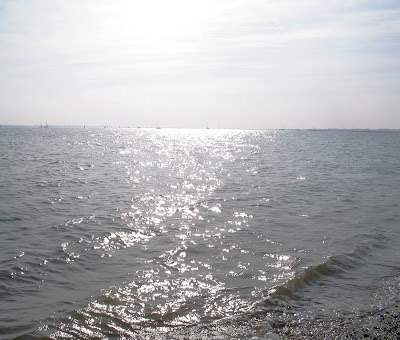 Still . . . better than forever being terrifically careful and sensible. Probably.
Posted by Juliet at 16:23

"as though two whole days had slipped through August's net and landed in late September by mistake" - how true, and how nice to get out and enjoy it. Your photos look fantastic as always - your dedicated readers hope that you manage to get round your camera problems permanently soon!

Borrowed camera or no the pictures are beautiful and the water looks wonderful. Funny about that cold. We have had it here, bad, all the way on this side of the pond. Four other blogs I read faithfully (other than yours) also referenced The Cold. OK, so I have know nothing about public health, but I am persuaded it is one germ that got us all. It all started here just after our English friends left Vermont and flew home... hmm. Hope you avoid the full hit. It would be a shame to waste that weather.

very nice! I love the poetic and creative posts of yours! happy Wednesday!