Woke last Sunday to the threat of snow.

By the time the children and I were leaving for Colchester Rugby Club at 9.00, it was falling fast. With tedious predictability, and despite this weather having been forecast for a week, the roads were ungritted and cars and buses were sliding backwards down hills and slipping on roundabouts.

Made it to the rugby club, only to find that all training and matches had all been cancelled. Northeast Essex was grinding to a halt. This did not augur well for the rest of the day.

SDs 1 and 2 and I were planning to catch a train to London at midday. Would the trains be running? And if they were, and the snow continue to fall, would they still be running when it was time to come home?

I sat in the rugby club, drinking hot chocolate and making calls to stations and theatres on my mobile, not one of which eased my mounting grumpfest.

Someone brought me a consoling bacon roll. I bit into it. It contained a slimy fried egg. I have nothing against eggs, per se. I just don't appreciate being surprised by slimy fried ones in the morning. Or ever, really.

I added 'feeling queasy' to my list of insurmountable trials and tribulations, along with the prospect of cancelling a long-awaited pre-Christmas treat, nursing half-frozen toes, and, most worryingly, wondering what had happened to the chin-up-best-foot-forward attitude which had been drummed into me since earliest childhood. Weep, wail, and woe was me.

Someone sensibly suggested that I pull myself together. I agreed. We drove to the railway station. The trains were running. We bought tickets. The snow turned to gentle rain. We ate some egg-free bacon rolls on the station (it was a bacon-rolly kind of a day). We boarded our train - and lo! there were seats!

We sat back and read books for the hour-long journey. Mine was Michael Morpurgo's children's novel, War Horse, which I was attempting to finish before we arrived at our final destination - the National Theatre - to see this year's revival of the award-winning stage adaptation. 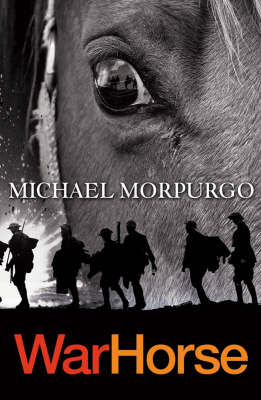 My children and I are great fans of former Children's Laureate Michael Morpurgo's books (I reviewed one of last year's favourites here).

Morpurgo has written about the inspiration behind War Horse:

'I was in the pub . . . "Are you writing another book, Michael?" said the old man sitting opposite me by the fire, cradling his pint. I told him that I'd come across an old painting of a cavalry charge in the First World War. The British cavalry were charging up a hill towards the German position, one or two horses already caught up on the barbed wire. I was trying, I told him, to write the story of the First World War, as seen through the eyes of a horse.

"I was there in 1916," the old man told me, his eyes filling with tears. "I was there with the horses too." He talked for hours about the horse he'd loved and left behind at the end of the war, how the old horse had been sold off to the French butchers for meat.

I determined then and there to tell the story of such a horse. But how to tell it? I had to find a way that didn't take sides. So I conceived the notion that I might write the story of the First World War as seen through a horse's eye, a horse that would be reared on a Devon farm, a horse that goes to the front as a British cavalry horse, is captured by the Germans and used to pull ambulances and guns.'

You can read the whole of his account of the genesis of the novel here.

A million horses were taken to France from Britain in in the First World War. Only 62,000 returned. War Horse tells the story of one of them - Joey, who arrives on a Devon farm as a frightened young foal and is befriended, nurtured and trained - both as a hunter and to pull a plough - by young Albert Narracott. When war breaks out, Albert is too young to join the army and is forced to part from Joey when the horse is taken into military service and sent to France. Eventually, Albert manages to join up (under-age), and sets of for France to fight for King and country but, most urgently, to seek the horse with whom he's formed so close a bond.

Apart from knowing that the play had received enthusiastic reviews when it first took to the stage in 2007, and that it used puppets, I didn't have very much idea what to expect when we took our seats and the lights went down. 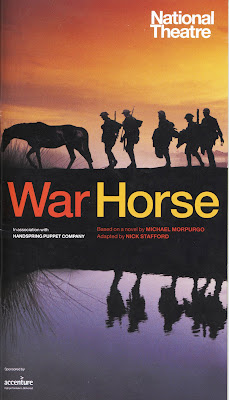 What followed was one of the most brilliantly inventive productions I've witnessed in all my long theatre-going days. The horses - brought to life by the wizardry of the Handspring Puppet Company, and each one operated (animated, in the true sense of the word) by teams of actors - are so acutely lifelike that they simply defy all expectations. 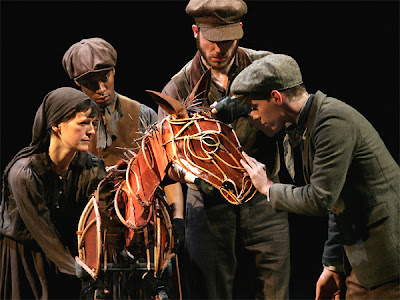 It really is quite impossible to describe their movement in words or photographs. They twitch, they frisk, they shy, they shudder and, yes, sadly, some of them die. I have not wept over puppets since I was about three. But I was not alone in finding Joey and his companion in arms, Topthorn, heartbreakingly moving. The tears streamed. 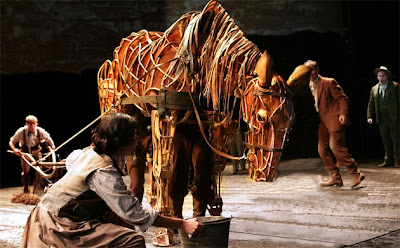 The stagecraft was mesmerising - lighting, sounds and music conveying the horror and carnage of battle so vividly that the hairs on the back of my neck were exhausted by the end of it all. It was completely involving in every respect. And I clapped so hard I raised bruises on the palms of my hands! 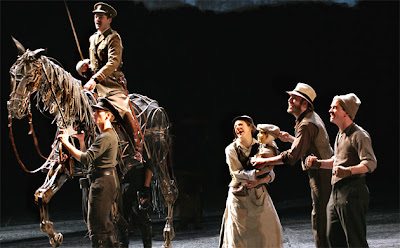 Special mention must go to the brilliance of the teams who operated the horses, and a deeply moving performance by newcomer Kit Harington, for his portrayal of Albert Narracott, from humble farm boy to battle-scarred soldier. Also central to the show was the 'Song Man', Tim van Eyken, whose narrative musical interludes wove together the shifting scenes quite hauntingly. Singer, melodeon player and winner of the BBC Young Traditional Musician of the Year, van Eyken's website plays some nice tracks from his album Stiffs Lovers Holymen Thieves. 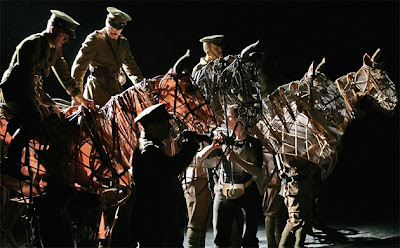 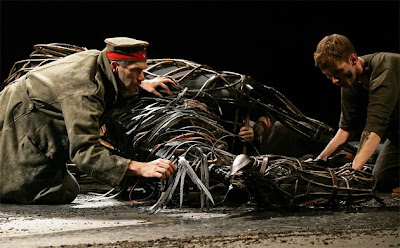 You can read Michael Billington's review from 2007 here and Charles Spencer's here.
And here are Morpurgo, cast members, audience reactions and a very brief glimpse of the puppets in action:

So, a memorable day from start to finish. The bruises on my hands disappeared after a couple of days, but the bruises on my legs, where I repeatedly kicked myself (and continue to do so) for not having taken my camera with me are still much in evidence. Why in heaven's name had I imagined there would be nothing to photograph? Eejit!
The light as we walked over the Thames via Hungerford foot bridge was spectacular - glinting on the London Eye through the complex structures of the adjacent railway bridge. I saw hundreds of photographs begging to be snapped!
And then there was the South American jazz band, playing a witty version of Jingle Bells, with a big yellow plastic barrel for a drum. And . . . the Christmas fair on the South Bank; skateboarders leaping against a backdrop of spraycan art on concrete; the wonderful Dazzle exhibition of jewellery and other delights; the children, eating chocolate cakes whilst enjoying the fabulous foyer music of Errol Linton (vocals and harmonica) accompanied (quite thrillingly) by Jean Pierre Lampé on double bass - kind of blues with a reggae feel
. . . so many pictures I could have shared. Ah well. I won't make that mistake again!
Here's Errol Linton doing his stuff:
Oh, and finally, our grateful thanks to Jane at Books, Mud and Compost, without whose timely tip-off about tickets going on sale I should never have grabbed our three seats for War Horse many months ago. Thanks Jane!
Posted by Juliet at 22:54

What a brilliant review, Juliet. You convey the sense of excitement and involvement that, in my view, can only be achieved by theatre. The TV and the cinema just can't match live theatre in that respect - and this seems to be a particularly good example. Who'd have thought that a novel with such a theme could be so successfully transferred to the stage? Worth a slimy egg, surely?

Glad you enjoyed it (and that the morning improved...)

Rob - you're right, it takes a trip to the theatre to remind us what a limiting experience staring at a small (or even a very large) screen can be, compared with the total sense of involvement one gets with live drama. This is certainly an exceptional production by any standards, though.

Jane - I remain forever in your debt! I hope you have as wonderful a day there as we did.