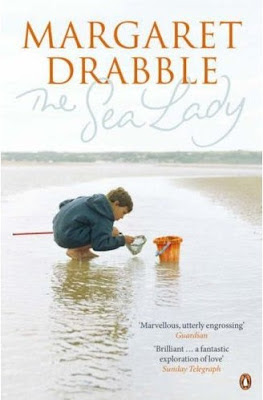 Humphrey Clark and Ailsa Kelman are in their early 60s, nearing the end of their successful careers. He is a professor of marine biology, she is a sometime actress, academic, writer and latterly media darling. Both are travelling northward, in order to receive honorary degrees at the University of Ornemouth, a town on the east coast of the Scottish Borders, not very far from the seaside village where Humphrey and Ailsa had met as children, half a century or more before.

On their respective journeys, each reflects upon their own life's journey, from their summer holiday encounters on the beach in the years immediately following the war, through their reunion as students, when they fell passionately but disastrously in love - a relationship which culminated in their brief marriage and swift parting. They haven't seen each other since.

The Sea Lady's subtitle is 'A Late Romance', which raises expectations - hopes even - that we're in for a satisfying romantic reunion at the end of the journey. Life is never so simple, of course, although it does become clear that the pair have never really shaken each other off. They may not have met for forty-odd years but their careers have been remarkably intertwined (without ever quite touching) and each has thought about the other often. Their marriage may have been a big mistake, but clearly this man who has made fish his life's work, and this dazzling, mercurial, mermaid-woman are in some way meant to be together? As they move towards their destination, the memories wash over them and they hardly know how to anticipate their eventual meeting.

Drabble's writing is rich, alliterative and allusive; bursting with fishy references; rhythmic like waves on a beach. She evokes the post-war world of spartan summer holidays by the icy North Sea, the boarding houses with incomplete jigsaw puzzles to while away the rainy days, the long hours spent exploring rock-pools. And in her characters' present-day lives, she has a sharp eye for the frustrations of academia, the triumph of the media and the marketplace, the sense of time running out too fast, the worrying small failures of mind and body, the struggle to keep up with hard-won reputation.

The Sea Lady is beautifully paced and well structured, and I found it a marvellously warm, funny, sad and satisfying novel. Margaret Drabble is good at showing how tiny every-day truths may shed bright light on the bigger, more awful truths of life and love - their incompleteness and the elusiveness of resolution.

Reflecting on his long immersion in the life-cycles of sea-creatures, their interdependence, their strange reproductive methods, their exploitation by man (not least in the ghastly Green Grotto of Greenwich, a monstrous marine theme-park inavertently presided over by Humphrey, about which he feels great shame), Professor Clark wonders about the significance of his travelling 'home' to the north-east coast after so long an absence. The image of salmon returning to spawn is one which recurs throughout the book. And as Humphrey (slowly, reluctantly but inexorably) and Ailsa (more swiftly and exuberantly) converge upon their destination, we wait expectantly. Will they make the final leap? 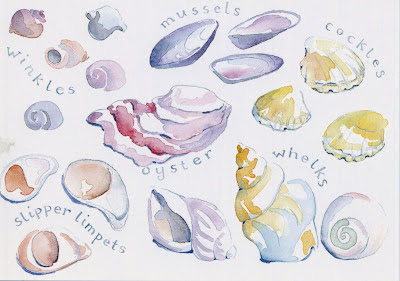 'The seashore was a treasure trove of shells. Pale pink and oval ones, like a baby's fingernails. Slate-grey, mussel-blue-black, greenish-bronze, russet-pink and pearly-silver. Little delicate cusps and slivers and moon-like crescents, worn by the tides, and stonier snail-like shells, with spiral helical ridges. They lay washed up on a bed of sand, on a fine grit of shell and sand, of shells and rocks and stones ground to grains of yellow and red and white.'

'The curtains were the old blackout curtains. They were very familiar to him. They were brown, with a repeating woven pattern in a lighter gold-yellow thread, and they had a thick black bunchy ill-stitched lining, that was meant to keep out the Germans. The pattern looked to him like demons with curved horns and curly forelocks, though his grandmother said that it was just a design. He had not told her about the demons because that would have made him feel foolish, but he had at one point dared to ask her what the pattern meant. She said it meant nothing. She said it was "just a design".' 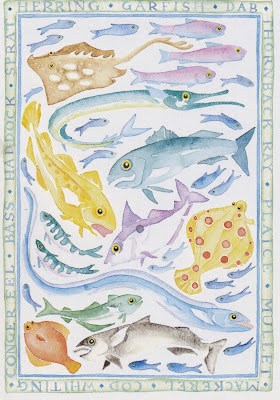 '[Ailsa] appeared to have dressed herself as a mermaid, in silver sequinned scales. Her bodice was close-fitting, and the metallic skirt clung to her solid hips before it flared out below the knees, concealing what might once have been her tail . . . She was boldly dressed, for a woman in her sixties, but she came of a bold generation, and she seemed confident that the shadowy shoals of her cohort were gathered around her in massed support as she flaunted herself upon the podium . . . Her feet were divinely comfortable in their little flat gold net slippers. In earlier days, at such events, she had vainly walked on high heels, on high knife heels, like Hans Andersen's poor Little Mermaid, but now she knew better.'

'As the train began to stall, he began - oh, slowly, not in a wave of sudden recognition - he began slowly to realize that he had been "out of his mind" to accept the invitation to receive an honorary degree in the new university at Ornemouth. What folly, what vanity, what complacency had seduced him into this journey? The sinews and valves of his memory would be prised open, slowly, painfully, with each mile he travelled, like the stiff hinges of a shellfish.'

'Poor Humphrey, poor good Humphrey. even his name was virtuous. A comfortable, old-fashioned, virtuous name. Whereas Ailsa was sharp and rocky and washed with icy spume. Ailsa was a weatherbeaten sail, putting out to sea. Ailsa Kelman, Ailsa Craig.'

(Oh, there was just one thing that I found rather irritating in this book. From time to time there are brief interjections from 'The Public Orator', who explains the sub-text, speculates on the protagonists' motivation and points to possible ways in which their stories will play out. Until the very final chapters, when all becomes clear, the reader can only assume that this is a structural device by which, for some reason, Drabble seeks to introduce an omniscient narrator into the action. It really jarred with me. The fact that its meaning and purpose is eventually revealed did not, to me, make worthwhile the fact that I had had to puzzle over it throughout the preceding chapters. If you can get over that, however, then you're in for a wonderful read.)

The gorgeous fish and shells illustrations above are by Muddy Island friend and neighbour Leafy Dumas. Regular readers will remember her lovely nautical Christmas cards . The fish and shells are available as postcards (50p each + p&p - you can contact Leafy here ).
Posted by Juliet at 21:17

Thanks so much for the curtain raiser, J. Margaret Drabble is one of the few writers whose books I make a point of reading as soon as they are published. (And now she lives just across the moor from here ...)

The use of a narrator/commentator features in many of her novels and I'd always assumed it was Drabble acknowledging her literary heritage (ie the 19th century novel) and her influences, in particular George Eliot.

But, as many years have passed since I was steeped in academic lit crit, I could be wrong ... there's probably a completely different explanation now.

Hi D. This was my first Drabble, but it certainly won't be my last. I'm all for multiple viewpoints in novels, but with this particular 'commentator' device, I simply thought that it was ineptly done for so established a writer, and that the 'joke' on the reader towards the end did not sit well with the style and feel of the rest of the book. It seemed just a little too much at the reader's expense, I suppose, and distracted from my engagement with what was otherwise a most satisfyingly structured novel.

Much as I admire her work, I don't think the novels Margaret Drabble has produced in recent years are as good her early novels of the '60s - although they will probably read very much as period pieces now - and what she wrote from the mid-'70s to the mid-'90s. But she's always been very adept at tapping into the social, political and academic zeitgeist.

I loved the trilogy that began with The Radiant Way, also The Ice Age and The Realms of Gold - Margaret Drabble at her very best. I can see that if you start with her most recent novel, that commentator could well be an irritant - I think it's a device she's used increasingly in the later works. (But I'll still read The Sea Lady anyway!)

Well I will really love to hear what you make of the Public Orator, when you do read it, D. Maybe she handles it differently in her other novels. Here, one isn't sure for most of the book whether the PO is a narrative device or a hidden character, and it all seemed a bit too heavy-handed. Like someone who laughs too loudly at their own clever jokes. I'm quite open to being told that it's the most marvellous aspect of the novel. It just didn't do it for me. Luckily it was so very enjoyable on many other levels that I won't be asking for my money back!

Loved MD in the seventies but since then have been put off by comments like those from 60goingon.
Sounds like this one explores very similar themes to 'New History' - old loves reunited, academia etc, so sounds like I'll have to give it a go!(Don't like the sound of the narrator, though!)