Up to my neck in stuff right now and not feeling very bloggy. But here are a few completely unrelated things which have managed to draw themselves to my attention in spite of everything, and so I thought I might as well share:

Alexander McCall Smith's emailed newsletter just arrived, and with it his thoughts on the tragic premature death of Anthony Minghella. I was going to post a link to the News page of AMcS's website, but it seems not to be working properly at the moment, so for those who can't at present access the site, here are the relevant passages about Minghella and the forthcoming TV premier of his film version of The No.1 Ladies' Detective Agency:

'Last night I went to the premiere showing in London of the film version of The No. 1 Ladies' Detective Agency. It was a bitter-sweet occasion: that very morning the director of the film, Anthony Minghella, that good and kind man, died in hospital from complications following an operation. We were all shocked by this sad news: Minghella was the United Kingdom's most distinguished film director and The No. 1 Ladies' Detective Agency is now his last film. As I am sure you can imagine, I felt very sad. Anthony had been planning for years to make the film. I had complete confidence in him - indeed, I counted myself most fortunate that it was he who was going to make the film. And now this. And yet we must remind ourselves that the film he has made is a wonderful, joyous hymn of praise to Botswana and to Mma Ramotswe. Everything in it is perfect. The actors and actresses are just right: wait until you see Mma Ramotswe, Mr J. L. B. Matekoni and Mma Makutsi - each one of them is just exactly as he or she should be! And the whole film is permeated by love.

The film is a stand-alone feature film that was designed to set up a subsequent television series. It will be shown on television stations throughout the world, but may also be shown in some theatres. We await news on that. But there is very important news on the television front: HBO in the United States and the BBC in the UK have teamed up to commission a thirteen-part television series which will start to be filmed in mid- to late-2008 and will be shown in the USA, the UK and throughout the world in early 2009. This is wonderful news indeed, and it came in time for Anthony Minghella to enjoy it. . . . Anthony Minghella was a great man who brought happiness and a very humane vision to this world. I feel very happy that he loved Mma Ramotswe, and I know that she would have loved him.'

He also mentions that he's just finishing work on volume five in the Isabel Dalhousie series, and has also completed volume five of the Scotland Street series, to be published in the UK in July under the fabulous title The Unbearable Lightness of Scones. I know I'm not alone in barely being able to wait!

Elsewhere: I'm indebted to Baroque in Hackney (a truly excellent and must-read blog in every way, rather belatedly discovered by me) for the link to this highly therapeutic site .

Some interesting thoughts on 60goingon16 relating to mathematical ineptitude (from which I suffer a particularly pathetic form), following on from the latest programme in this fascinating series on Radio 4 . 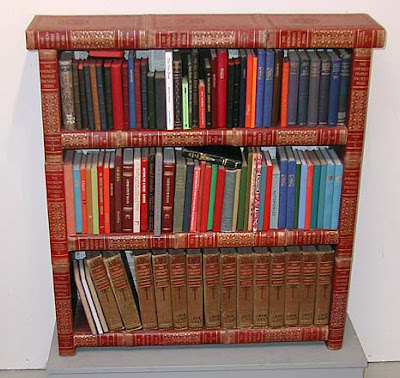 I first encountered the inspired bookshelves of Jim Rosenau on Alex's new(ish) Bookshelf site (a spin-off from the more famous Shedworking) and was reminded of them again this week by Susan at the Green Chair Press . This into That is well worth a visit. 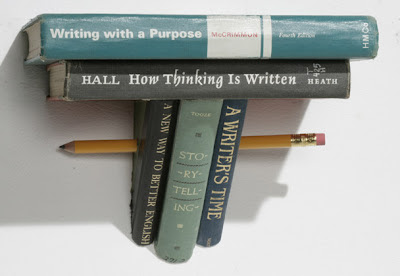 Those who might feel a bit squeamish about seeing books used for purposes other than reading should start with Rosenau's account of how the 'near religious relationship to books' in which he was raised ('like all observant families, we were taken once a week to the library for worship') led him to consider using discarded books - outdated reference works and novels nobody wanted to read, left over at the end of library sales - as a raw material for creating something new. Personally, I find his work enormously amusing and visually appealing.

Finally - I drop in occasionally to ColourLovers , just to see what's new. There's always something surprising or entertaining (see eg today's photos of the Venice Carnival .

My lateset visit introduced me to Craig Conley, author of a guest post on strange colour names (there's even a shade of brown called 'Grrrrrr' - now that could come in handy!) A subsequent trip to Craig's own site was a revelation. He's the author of a collection of wonderful-sounding volumes, including a Dictionary of One Letter Words (did you know there 34 definitions of the letter G, for example?); a Dictionary of All-Vowel Words and a Dictionary of All-Consonant Words .

Finally, finally - there has been a lengthy exchange of comments on a previous post, following a complaint that Musings takes far too long to load. If anyone else is having serious problems, please let me know. I can only gauge what happens here on my medium-speed broadband connection but I'd be worried if I discovered that my too-large photos, too-numerous widgets or too-lengthy homepage were sending readers away in angry droves. So - please tell me how it was for you.

(Hmm, for a non-post, this has actually taken up quite a lot of space.)

Juliet
'The Unbearable lightness of Scones' - that is totally classic! Although I like AMS I don't read a great deal of him - but that one's a must. Have just ordered Sea Lady from my library. Hadn't realised it was the local 'big read' for Bath Lit Fest (oops, where have I been?)so plenty of copies in circulation.
Have a good Easter. We are off to my island 'second home' of Anglesey en famille. We haven't done famille for quite some time so should be interesting!

Hi A - Oh that's interesting about Sea Lady and Bath Lit Fest. Will be v interested to hear what you make of it. Enjoy your island Easter - and sincerely hope weather more seasonal over there than it is on this side of the country. 'Filthy' is the only description which springs to mind (apart from 'COLD'!) - definitely not suitable for little fluffy chicks and bunnies, anyway!

I did a workshop with an art therapist who used old books (as in rejects from charity shops) as a basis for 'memory books' the creativity went into the client using their own art to recover the book, she stuck several pages together and cut out shapes to make 3D spaces within the book, where they could insert anything that was special to them,sort of a box within a book, the other pages were covered with photo's collages, writing, found object's or whatever meant something to the maker, I saw one that used a slimline pocket diary, it turned out really well.

(the page did take a wee while to load)