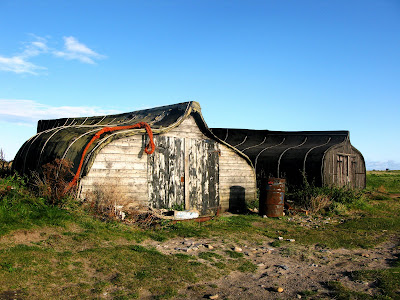 My little holiday last week began on the island of Lindisfarne - or Holy Island - often described as the 'cradle of Christianity', which lies off the coast of Northumberland (click here for map).

I decided that it was high time I revisited Lindisfarne the instant I landed in Bradwell and went to explore the ancient church of St Peter on the Wall, just across the water from Mersea, in August.

I'll write more about the deep connection between these sacred places, and about my stay on Lindisfarne, in the next day or two. But in the meantime, I wanted to show you these wonderful boatsheds - literally sheds made from upturned fishing boats, and used for storage by the island's fishermen.

They are quite a feature of Holy Island - though by no means unique: I've seen similar sheds on the Kent coast and on the western Scottish island of Mull, and I'm sure there are many other examples - but on Lindisfarne there is a notable preponderance. And oh how beguiling they are! How they draw the eye and the imagination. I could have photographed them for hours and hours. I was desperate to see inside one of them, but although I hung around hopefully, I encountered no likely looking fisherman to whom I could communicate my urgent need to break and enter. So I had to content myself with enjoying their picturesque exteriors.

Google 'upturned boat shed Lindisfarne' and you will find a million other (mostly superior) photographs of these immensely photogenic sheds. Nobody who visits the island with a camera will be immune. But here is a selection of my own point-click efforts, which I hope will convey some small indication of the seductive charm of the Holy Island Boatsheds. 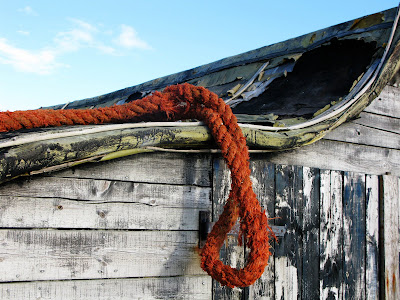 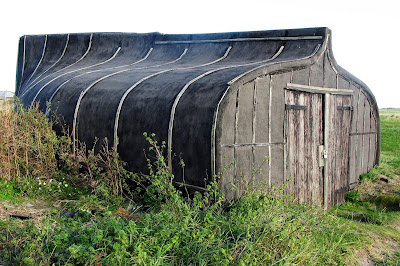 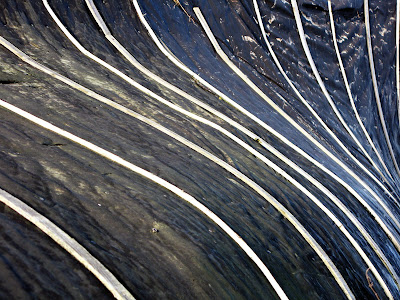 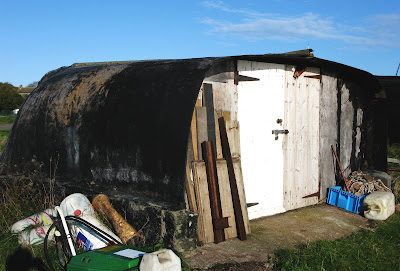 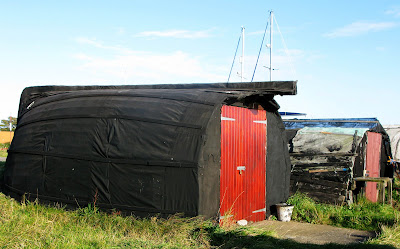 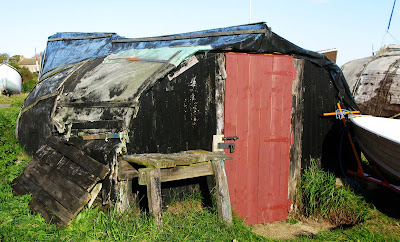 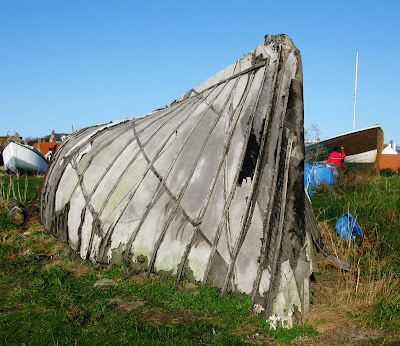 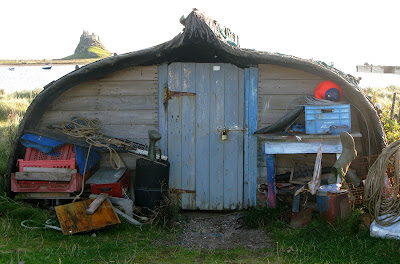 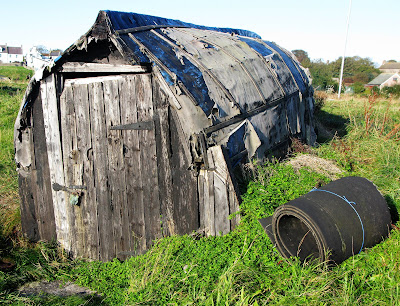 The boatsheds above all lie in the same bay, between the Priory and the Castle. The ones below are to be found high on the volcanic plug atop which perches Lindisfarne Castle (in fact an Edwardian country house, rather than a defensive fortification - of which more later).

Exactly three years ago this month, a fire completely destroyed two of the original three castle boatsheds, and the remaining shed (the stern half of a nineteenth-century herring drifter) was badly damaged. The full story is recounted here and here.
Thankfully, a replacement boat was sourced in an Edinburgh dockyard, cut in two and installed in the same location as the burned sheds. All three now house displays, accessible during castle opening hours, which explain the history of the boats and the story of herring fishing on the island. You can see a video of one of the new sheds being installed here .
And finally, there's an article about the genesis of the fourth structure in this row, just to the left of the three upturned boats - the ticket hut for the castle - here .
Posted by Juliet at 21:52

Wow. I love those. I've never seen such a thing.

Fantastic pictures. I'm all the more interested as my one attempt to get to Lindisfarne was thwarted by the tide and I entertained my family by nearly getting drowned while taking photos as the water swept in. You were obviously much more sensible.

What a beautiful place and great photos, as usual. I hope you are feeling very rested.

Excellent pictures. I love these sheds and the way they recycle the boat hulls so beautifully. They remind me of Britten's Peter Grimes, too.

For some lovely photos of similar-but-different Shetland boatsheds, see http://ready4thehouse.blogspot.com/2008/11/capsized-storage.html

Thanks for this lovely piece about the boatsheds. I'm about to make a trip to Lindisfarne myself to do some work on Remembering the Bible (see my blog http://janet-novice-blogger.blogspot.com/] and would like tp put a link there when the time comes. hope that is OK.

I was brought up in a little village - Ullapool - on the NW coast of Scotland. We looked forward to the day in the winter when my father would turn some of his boats over to keep them out of the weather. As soon as he did so we would move in and make them into little houses. The seats would define the room areas and slowly but surely over the winter they would be furnished. I wonder what he must have thought as he turned them back over in the early spring. Good memories :-)

It is almost impossible to imagine that your photo is exactly the same as a painting I did 4-5 years ago.


See it on my blog happybrush.blogspot.com

Wow, what a shed :) This looks really great and very creative, using boats and convert them to shed is a great idea. I love it. Rob@ storage shed plans

Those are the coolest storage sheds I have ever seen. If any of your readers are looking for a more conventional shed there are some great shed plans at http://www.icreatables.com/sheds/shed-plans.html I don't think they will ever be able to compete with a boat hull. That is so cool.Thanks for the great pictures.